To share your memory on the wall of Bruce LeBlanc, sign in using one of the following options:

Print
Bruce P. LeBlanc, 64, a resident of Eagle Harbor passed away on Friday, June 19, 2020 at Aspirus Keweenaw Hospital in Laurium.
He was born on October 11, 1955 in Detroit to Vernon and Susan (Lehto) LeBlanc. He was united in marriage to Lorraine... Read More
Bruce P. LeBlanc, 64, a resident of Eagle Harbor passed away on Friday, June 19, 2020 at Aspirus Keweenaw Hospital in Laurium.
He was born on October 11, 1955 in Detroit to Vernon and Susan (Lehto) LeBlanc. He was united in marriage to Lorraine (Lorry) Brazee June 27, 1981 in Traverse City.
After birth Vernon and Susan moved to Ohio where he attended the local schools. He graduated from North Olmstead High School with the Class of 1973. He excelled in football, baseball, and hockey, being scouted by the Major Leagues. He went on to Adrian College and for one year played baseball. His Dad handed him a J Tool (Air Stapler) and told him to take it apart and put it back together. He did and quit college and went to work in the Fastener business. He was an ace salesman and stayed for years. He went on to become Sales Manager for Multi Fastening Systems in Grand Rapids. Even as Sales Manager, the customer would ask for Bruce to “Fix the Tool.”
“Here I Am Lord”…Bruce and Lorry answered that call and began their walk with God. Bruce became Youth Director of Mamrelund Lutheran Church in Grand Rapids. He loved kids. A love for the Copper Country brought them to Eagle Harbor and Bruce and Lorry both faithfully served Shepherd of the Sea in Copper Harbor.
Bruce was an avid hunter and fisherman. He had a good eye and with his B.S.A. rifle got his buck most every year. He enjoyed fishing on Lake Superior and cooking the fish on the grill. He named his Grady White “Good-n-Nuff” in respect for his favorite uncle, Pete Lehto.
Bruce was a volunteer member of the Eagle Harbor Township Fire Department and served for 20 years. One incident that put him on the map was he volunteered to rappel down Brockway Mountain to rescue a german shepherd that had fallen over. The dog was down there for three days. When he saw Bruce he wagged his tail and eagerly scarfed down a bone.
Bruce had a love for working with his hands and a gift for Carpentry. He built a workshop and proceeded to construct many beautiful furniture pieces for Lorry.
Having to make a living and buy a new Harley, he went to work for the D.N.R. as a carpenter for 15 years. He enjoyed working at Fort Wilkins State Park and was part of a continued effort to improve the Park. Each night he took Lorry and Joli for a “scoop the loop” ride so they could see his “master craftsmanship”. His friendly smile made many lasting friendships and “happy campers”.
One day, Bruce had a persistent cough and it progressed into lung cancer. After treatment at Mayo, Wausau, and Aspirus, it was not to be. Bruce leaves behind his sweet friendly smile and beautiful blue eyes to someone who will see our beautiful world again. We thank Aspirus, and Wausau and the brave workers on the frontline…it was a tough fight.
Bruce was an ultimate team player and God likes a team player. God needed him for His team and brought him home early.
He is preceded in death by his Brother, Peter LeBlanc, his maternal and paternal grandparents, Toivo and Linda Lehto and Peter and Clara LeBlanc, and his uncle Peter Lehto.
He is survived by:
His wife Lorry of Eagle Harbor
His parents, Vernon and Susan LeBlanc of Kearsarge
His Aunt, Patsy Lehto
His sister in law Barbara LeBlanc of Cary, North Carolina
His nephew Bryan LeBlanc of Seattle, Washington
His Niece Chloe LeBlanc of Seattle, Washington
A graveside service will be held at 11:00 am on Thursday June 25, 2020 in Section 71 of the Lake View Cemetery with Pastor Peter Vorhes to officiate.
In lieu of flowers donations may be made to Shepherd of the Sea Church, Copper Harbor, or the Eagle Harbor Fire Department, Eagle Harbor.
Online condolences for the family may be left at www.ericksoncrowleypeterson.com
The Erickson Crowley Peterson Funeral Home in Calumet is assisting the family with the arrangements.
Read Less

To send flowers to the family or plant a tree in memory of Bruce Paul LeBlanc, please visit our Heartfelt Sympathies Store.

There are no events scheduled. You can still show your support by sending flowers directly to the family, or planting a memorial tree in memory of Bruce Paul LeBlanc.
Visit the Heartfelt Sympathies Store

We encourage you to share your most beloved memories of Bruce here, so that the family and other loved ones can always see it. You can upload cherished photographs, or share your favorite stories, and can even comment on those shared by others.

Diane and I are so sorry to hear of Bruce’s passing. We shared some really fun times with you two back in the early days on Randall St. along with the time we visited you and camped in Copper Harbor and met Uncle Pete! It all seems so recent. Please know you are in our thoughts and prayers.
Comment Share
Share via:
E

Posted Jun 22, 2020 at 09:35am
So sorry Lorry, Sue and Vern,
I remember and cherish all the good times we spent together. Tom always talked about the time we had smoked fish at Vern and Sue's place. Tom and Jason always talked about the building of Bruce and Lorry's house. I will always remember the cordial and courteous man Bruce was. He was very entertaining and I will miss him. Best wishes and prayers to all of you.
Ellen Miedema
Comment Share
Share via:
SM

Lorry, I’m so very sorry for your loss. Sending hugs and prayers. A beautiful obituary for a man well loved. 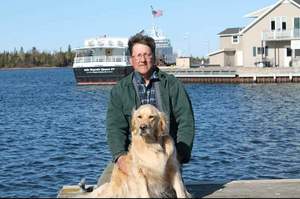